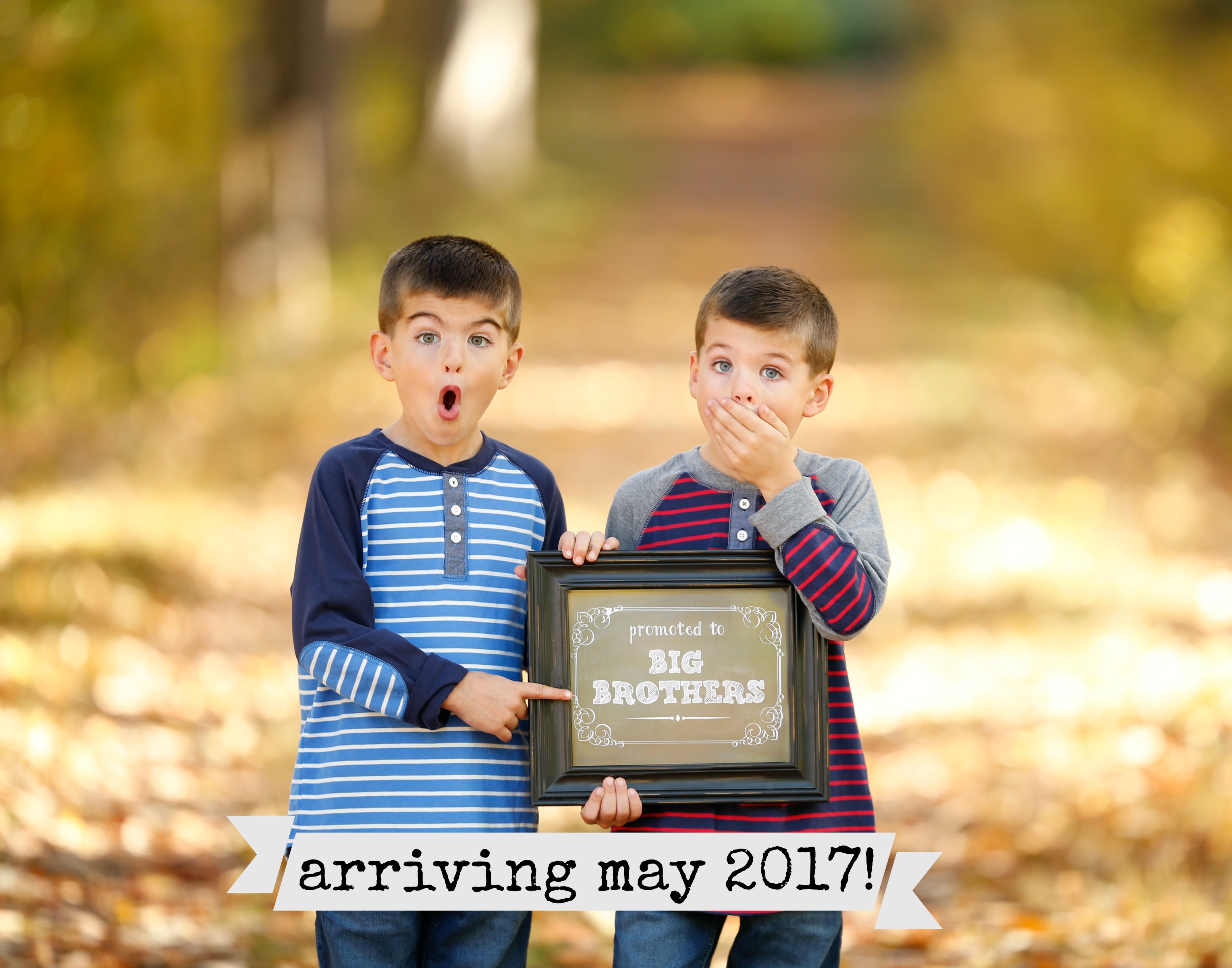 Our 11 year wedding anniversary. We have a tradition that every year on our anniversary, we watch our absolutely hilarious wedding video. But because my husband had a football game on our actual anniversary (he’s a high school football coach), we decided to watch the video the night before.

After watching our wedding video Ed said to me, “pull up a video of the boys when they were little”. We went through a bunch of old videos of when the boys were babies and he said to me, “doesn’t this make you want to have another one?”. To which I replied without hesitation, “HELL NO”. Quote, unquote. HELL NO.

If you know me or follow me on Facebook, you probably know that we had a bitch of a time getting pregnant with the boys. I’ve always been very open about our experience.

We tried on our own for over a year, went through months of testing to see if anything was wrong with either of us. They couldn’t find anything besides the fact I had PCOS (polycystic ovarian syndrome) so we were labeled with “unexplained infertility”.

Anyway, we went through 5 unsuccessful IUI’s (3 with injectionables) and thankfully got pregnant with the boys on our first round of IVF. Although the constant waiting and emotional stress of the whole thing kind of sucked, physically I had a great experience and didn’t have any negative side effects at all. No weight gain, no crazy mood swings. I don’t know if I was just lucky or if it was the fact that all I read were horror stories – but I felt fine physically throughout the entire process.

When the boys were 2, we decided to try for a 3rd using the frozen embryos we saved from our IVF cycle. We had 2 saved and only one made it through the thaw process – which made the decision to only implant one a lot easier. That round didn’t work.

I remember getting the call from the nurse and thinking, HOW in the world can this NOT work? That was actually my thought after every time we didn’t get pregnant, but especially after this time when our first round was successful.

With all the medicine, perfect timing, the best “swimmers” – how? I just didn’t get it. I still don’t. It amazes me that people actually get pregnant on their own….and speaking of being amazed, this is a little off topic but please for the LOVE of all things holy, stop asking women (those you know and those you don’t know) if or when they’re going to have kids or if they are going to have more kids. You really never know what an emotional subject this can be. You don’t know if they just found out they can’t carry a child or if they suffered a miscarriage or if they had been trying for months or years. I’m certainly guilty of asking those questions and after my experience I realize now not only how insensitive it was, but how it was absolutely NONE of my business and it’s something I will NEVER, EVER ask another woman again.

So many people would tell me stories of their friend who went through IVF then magically got pregnant on her own, including my own doctor. That was great for them, but in a way it created a bit of false hope for me. I hadn’t been on birth control since 2007. I had never gotten pregnant on my own. I was happy for the stranger friends would tell me about, but I never thought it would happen to me. I felt like if it was going to happen, it would’ve happened already.

In May of 2015 I did, surprisingly, end up getting pregnant on my own for the first time. We weren’t actively trying (my cycles have never ever been regular enough to even know when was a good time to try), it just happened. But right from the beginning things weren’t good and I ended up miscarrying and having a d & c at 9.5 weeks.

That experience (and again this was just MY experience) was worse than trying all of those months and never getting pregnant. After that my doctor told us that if we did want to have another baby she would recommend getting some help – not only to get pregnant – but to STAY pregnant.

I wasn’t willing at the time to go through IVF again, especially since the last time hadn’t worked and even more so after such an emotional loss. We were very happy with our two healthy, happy boys and decided to just count our blessings and be happy with our family of 4.

Spring of last year I had a never ending period…like 3 weeks or something crazy. This has been the story of my life (ever since getting off the pill). I was put on the pill to help with PCOS, but as soon as I got off, ALL of the issues I had prior to being on the pill for 15 years were right there again. So when I saw my doctor and the first thing she recommended was going on the pill, I was pretty hesitant. I get that the pill is a great thing for women who don’t have hormonal issues – but when you do – I feel like it’s just putting a band-aid on the real issues. It was still confirmed through ultrasound and the fact that my periods were all effed up that I had PCOS and I felt like going back on the pill until I was 55 was not getting to the root of the problem. And what the hell was going to happen when I got off?

I reached out to Dr. Brooke, a naturopathic doctor who I had worked with in the past to get my hormones balanced and my cycle (somewhat) back on track. She went over the pros and cons of both going on birth control and not, and I chose not to. She prescribed some herbs to deal with my cycle and I although I wasn’t regular, I was MORE regular that I had been in a while.

So when I realized randomly on my anniversary that I hadn’t had my period in about 8 weeks, my initial thought wasn’t that I was pregnant. I didn’t have any pregnancy symptoms, just craving salty foods and a bit hungrier than usual, which I thought was PMS. No food aversions, no sore boobs…nothing that would make me think that I was pregnant at all…and again, not having a period for 8 weeks wasn’t a red flag for me.

Typically what happens if I don’t get my period for a while, I call my doctor, she makes me take a pregnancy test, gives me a pill to take for 7 days, I get my period and I go on my way. I can’t even tell you how many times I’ve done this. Dozens, if not more.

So that Friday night, I had to run to Walgreens to pick up Ed an anniversary card (yes, on the night of our anniversary – I’m legit, the worst), picked up the cheapest single pregnancy test I could find, stopped at the liquor store for a bottle of wine (priorities) and drove home.

Because i didn’t want anyone to see the box and get the wrong idea (my Dad lives in our in-law and my mother-in-law was up that weekend) I wanted to get the pregnancy test out of the way. It was 6:00 at night. Pregnancy wasn’t on my mind so I didn’t care to wait until the morning when your hormones are supposed to be higher or whatever. I had to pee. I wanted to get rid of the box. And I figured I’ll just do it now and call my doctor on Monday.

And I swear before I even finished peeing on the stick I saw the BRIGHTEST frigging blue plus sign ever. I took a picture of the test and texted it to Ed with the comment “WTF” (seriously? who does that!), came out of the bathroom and stared at my bottle of wine on my island in pure disbelief.

Ed didn’t get the text until after his game. A game in which they beat their league rivals in a come from behind win. When he called he said, “Are you kidding me? This is the best day of my life!”. Which immediately made me feel a little guilty for not being completely thrilled when I found out. He was a LOT happier than me at first…probably because he was going to be able to drink wine at the WINERY we were going to the next day to celebrate our anniversary lol!

I remember back when people would get pregnant and be all like, “I was SO surprised” and I’d think to myself, you DO understand how it happens, right? How the hell are you SO surprised.

I guess we knew it was a possibility, but neither of us thought it would happen on it’s own. I mean we tried and tried with a LOT of help to get pregnant NUMEROUS times with no luck. We were basically told that when I did get pregnant it was a “fluke”. So to say I was surprised, shocked and more than anything else scared out of my mind that I would miscarry again is an understatement.

Clearly neither one of us were completely opposed to the idea of having another baby or else we would’ve taken those precautions, but I think we both had come to terms with the fact we were done. And I think my husband was waiting until March to schedule his little snip so that he could sit on the couch and watch March Madness all weekend….

I guess the good thing about being of “advanced maternal age”, having a history of infertility and a prior miscarriage is that I was able to get an appointment right away and all of my levels were checked. My progesterone was low (but probably higher than it would’ve been if I hadn’t been taking the herbs Dr. Brooke had me on) so they immediately had me start taking progesterone and that was that. We were having a baby (luckily only one!) and it was all done the old fashioned way 🙂

It’s a boy! With a very visible brain (weird)… 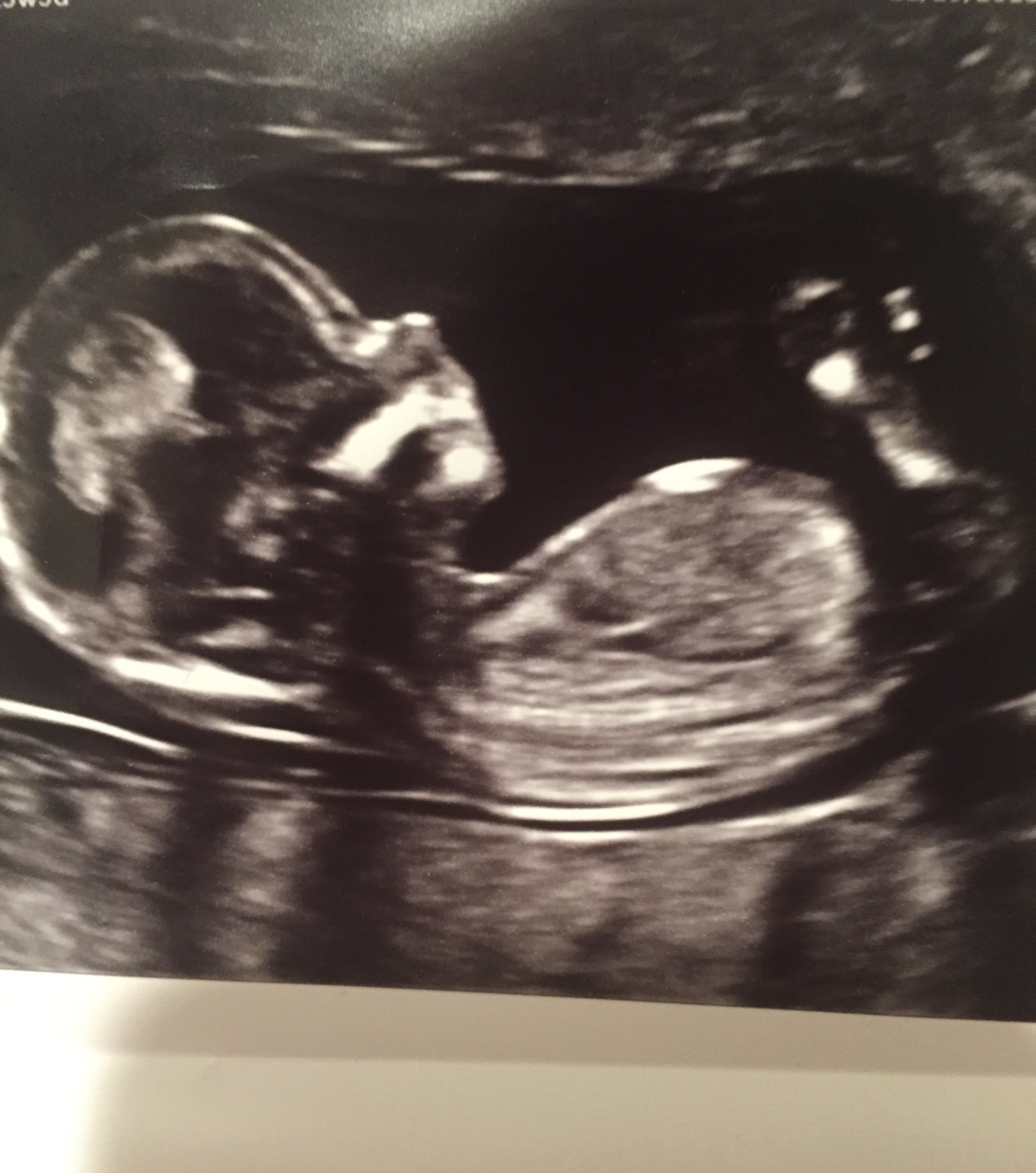 My mom passed away last March. She was also 39 when she had me. Some of you may not believe in things like this, but I feel like she pulled some strings up there…not enough strings to make this baby a girl who would torture me as much as I tortured her (thank God), but I like to think that she had something to do with it. It’s kind of the only thing that makes a little sense….either that or I’m blaming Dr. Brooke and her herbs 🙂

Stay tuned for part 2 in which I’ll fill you in on all the fun first trimester things like food cravings, aversions (I’m basically a vegetarian), how my workouts have changed and how this pregnancy has been different than my twin pregnancy.