I swear I’m going to try to get a bit more consistent with my posts – I’ve just been so busy with vacations, the boys being out of school for the summer, and just being out of my usual routine, that I just haven’t had a chance to sit down and write a post….which is exactly what I wanted to talk about.

See, one thing I’ve been hearing a lot of with my clients is excuses. Much like the one I just gave you for not being more consistent with my posts 🙂

Have I been busy? Sure. But, I’ve managed to find time to binge watch Sons of Anarchy and spend hours on Houzz and Pinterest picking out countertops and pinning 5 year old birthday party ideas.

I have plenty of time, I’m just *choosing* not to spend the time that I have doing what I say I’m gonna do…it just feels a hell of a lot better to say, “I have no time” than to admit to not using my time wisely.

Here are just a few of the things that I’ve heard a lot from clients, friends, and family over the last few weeks when it comes to the reasons why they aren’t reaching their fitness and fat loss goals.

Reason:“I was STAAARVING so I had to just grab a bagel and cream cheese”

Reality: No, you chose a bagel and cream cheese. There are always other options.

Reason: “I went through the drive through so salad wasn’t an option”

Reality: Ok, so you didn’t plan enough time to eat, or you didn’t have anything on hand to hold you over until you were able to eat something with utensils. Ordering a Big Mac with fries and a Coke was a choice.

Reason: “Once the kids go back to school, I’ll have more time and it will be so much easier”

Reality: You still have to feed yourself AND your kids, both now and in September. Why wait until they’re back in school to pay closer attention to your choices? Don’t let the fact that you’ll be back in a routine and you have plans to tighten your nutritional reigns in September, give you a reason to make August a free for all.

Reason: “I don’t have time to exercise”

Reality: How long are you on the couch watching tv after work? How many times do you press snooze in the morning? How often do you take the elevator instead of the stairs or find the closest parking spot instead of walking a bit more?

Reason: “This is the first time I’ve been to the beach without my kids since I was pregnant with them, so I had to drink 4 beers and eat alllllthecheezits. Plus I’m on vacation! – Yours truly 🙂 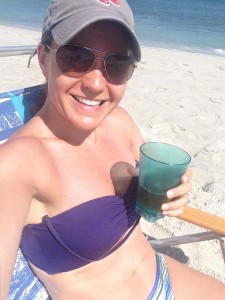 I have an issue when we (myself included here!) set specific goals for ourselves (lose fat, get strong, limit alcohol, no cheese-its at the beach, walk more, limit fast food) and instead of owning our choices when we don’t follow through with those goals and actually face reality, we make excuses.

Believe me, I know this stuff is hard to swallow. I tend to get defensive and automatically think “but I was on vacation” or “you don’t understand, there was nothing else to eat” etc. etc..No. Nope. Sorry. No. I had a choice and so do you.

Instead of making excuses for why you are doing something in opposition of your goals, face the reality of the choice you’re making, accept it for what it is, and don’t punish yourself for it…..No guilt, no remorse, no excuses as for why you did what you did. You (and again, I’m talking to myself here too!) all have realities to face and choices to make. You can choose to say no to instant gratification, or you can indulge and own that choice. But if your reality is that you want to change x, y, and z –  your choices should reflect that more consistently than not, or it might be time to re-think those goals.

Something to think about as we head into the weekend.

Talk to you soon – No excuses 😉 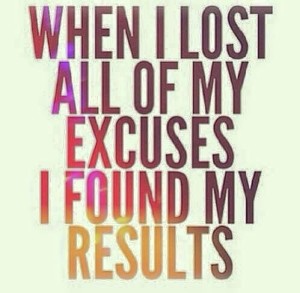 PS – For those of you who ARE choosing to let loose a little bit for the rest of the month due to vacations etc…, I’ll be coaching another 15 Day Challenge beginning the week after Labor Day! Get on the VIP list and get first dibs on spots in the coaching group by adding your name here.